Transfer of Know-How in Hydrogeological Surveys and Subsequent Water-well Building in the Province of Zavkhan, Mongolia

The implementation of hydrogeological boreholes, together with technologies that are adapted to the conditions in the recipient country for collecting and distributing water will provide the citizens, including the shepherds and their livestock with access to quality drinking water.

This denser network of hydrogeological boreholes will lessen the distance that the local population is currently obliged to cope with in order to obtain water for drinking and for fulfilling other needs, including a supply of water for their herds of livestock. In addition to saving time and the fuel for the motor vehicles used for the delivery of water, the project will have additional economic benefits for the population since they will be able to make use of pastures land that are as yet unused due to their remoteness from any water sources.

These new pastures for their animals will enable a higher degree of productivity and as an additional result a higher income from the livestock products that are sold. In parallel (assuming the continued maintenance of approximately the same number of animals) the project will have a positive impact on the environmental conditions in the region because, due to the increase in the usable area the negative impact of excessive utilisation of the pasture in the direct vicinity of the current water resources will be diminished.

Equally significant is the possibility of further development in regard to the utilisation of the local capacity without any external interference. In order to increase the capability of the local professionals to undertake the construction of groundwater wells the know-how related to the design and implementation of groundwater wells in varying geological and hydrogeological conditions and to the sustainable utilisation of the existing groundwater resources will be transmitted to them.

Also of particular importance in this context is sharing experience in regard to identifying the optimal locations for the hydrogeological boreholes and also in relation to their implementation in areas of permafrost and in conditions in which the pressure head of the groundwater is above ground level (an artesian aquifer). 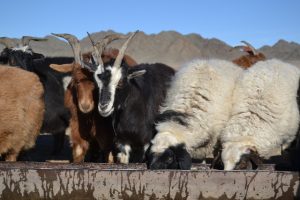