On 23 March 2018, the twelve-day 62nd session of the UN Commission on the Status of Women ended in New York. The largest event in the United Nations right after the session of the General Assembly was attended by a large Czech delegation this year, which also included Eva Lacinová from CzechAid. As part of an accompanying event focused on the factors of support for women, peace and security, she familiarized those that were present with the successful projects of CzechAid in Zambia and Moldova, which have significant gender-related aspects.

“The UN plays a crucial role not only in assisting developing countries but, as in this case, it also offers room for meetings and debate among the representatives of all Member States. Furthermore, the Czech Republic is presiding over the United Nations Economic and Social Council (ECOSOC) this year. I am, therefore, glad that not only the representatives of the Ministry of Foreign Affairs and the Human Rights Section of the Office of the Government of the Czech Republic were represented in the Czech delegation in accordance with the principle of participation, but also the Czech Development Agency, the academic sphere and the non-governmental sector. The voice of young people was forgotten either, and young delegates are part of the delegation for the second year now. I consider this composition of the delegation to be very beneficial and promising for the further development of the agenda of empowering women and gender equality, not only in our country but also in countries where the Czech Republic is helping,” says Dagmar Novohradská from the UN Department of the Ministry of Foreign Affairs.

The most famous member of the Czech delegation was undoubtedly the former Miss World Taťána Gregor Brzobohatá, who is currently an activist and ambassador for Sustainable Development Goals in the Czech Republic and the founder of the Krása pomoci foundation. The Sustainable Development Goals are one of the main topics of this year, when the Czech Republic is presiding over ECOSOC, one of the most important UN bodies whose agenda includes SDGs and which includes the United Nations Commission on the Status of Women. In the accompanying program, Taťána Gregor Brzobohatá took part in a second accompanying event of the Czech Republic organized by the Human Rights Section of the Office of the Government of the Czech Republic, and as chairwoman of the board of the Krása pomoci foundation, she spoke about women in the non-profit sector and about the necessity to support non-profit organizations dealing with equal opportunities.

“There are several reasons why more women are at risk of poverty in old age (21 % of solitary senior women are at risk of poverty, while “only” 9 % of men are). The main reason is the gender stereotypes about male and female roles in society. Women are usually expected to take care for their children, their families and their households, which results in a long-term interruption of the career path. Women who are around 50 years of age take care of their ageing parents, and because of the inflexibility of the Czech labour market, it is restricting and discriminating for them. It is evident that if the amount of pensions is linked to the career path of women and men, these factors play a considerable role in the lower pensions of women and hence their higher risk of poverty in old age. This issue must be addressed and solutions sought,” was one of the points made in the speech of Taťána Gregor Brzobohatá, whose Krása pomoci foundation has been supporting senior citizens of both genders for ten years now. 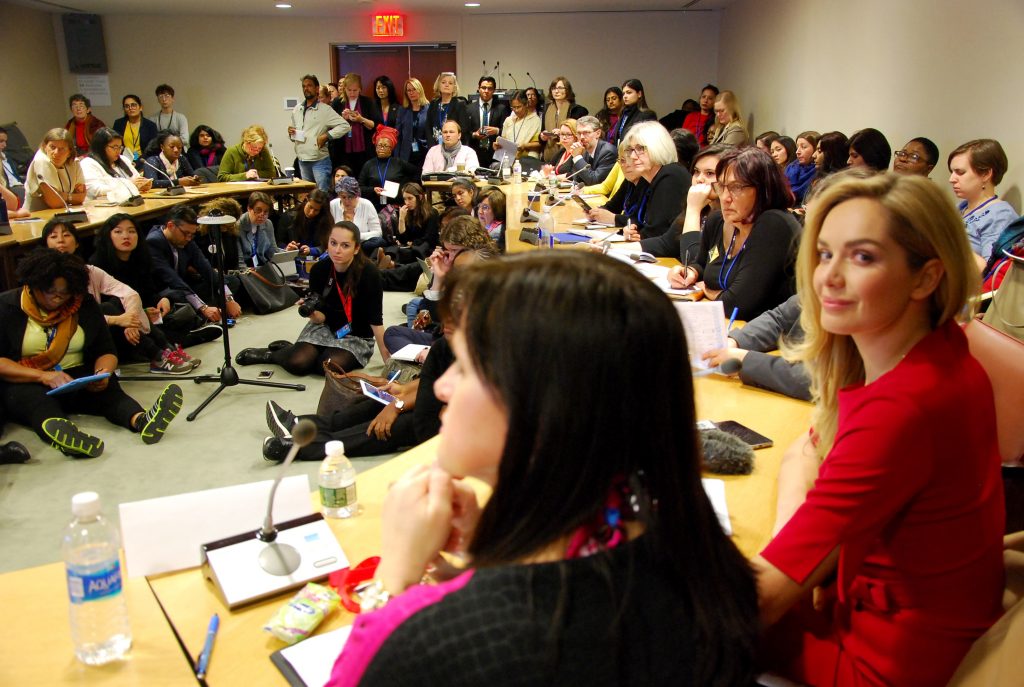 The Czech non-profit sector, and especially the FoRS platform, was represented also by Jan Koubek Kejzlar from the Czech branch of the organization CARE, which was founded in our country as the very first country in the post-communist region. Today, CARE International provides help in 93 countries around the world. CARE Czech Republic is one of the implementers of CzechAid projects, e.g. the project aimed at improving the quality of life and employment for women with disabilities in Georgia.

“The active participation of the representatives of the academic sphere such as Míla O’Sullivan from the Institute of International Relations or Kateřina Krulišová from Nottingham Trent University and their academic view on the topic of the accompanying event dedicated to the status of women in Central and Eastern Europe and the approaches to the implementation of UN Security Council Resolution 1325 on Women, Peace and Security were beneficial and complemented the contributions of other speakers very well,” says Jana Přikrylová from the Permanent Mission of the Czech Republic to the UN. A government representative from Ukraine also addressed the aforementioned resolution 1325. Representatives from Moldova were also present at the event and highlighting the role of the Czech Republic in supporting their country as part of development cooperation. The CzechAid projects in Moldova focus, for example, on increasing the capacities of the Ministry of Labour, Social Protection and Family, or on providing home care.