Czech aid to Ukrainian education continues – what results does it have?

The Czech Development Agency was facing a challenge when the Czech government decided to provide aid to Ukraine in March 2014. Development programs are usually planned several years in advance and are implemented for at least five years in order to achieve an clear result. However the aid to Ukraine, which was a response to the ongoing conflict in eastern Ukraine, was immediate. The government had set a time-frame for 2014-2016 for us.

All of these development interventions made sense, but our budget for Ukraine was only 25 million crowns. We had to take into account what other donor countries are doing in Ukraine and what the Czech Republic has to offer.  After consulting our embassy in Kiev, we chose the reform of higher education as the area in which we would provide aid.  In July 2014, Ukraine adopted a new law on higher education. The law was unique in the conditions in Ukraine, because it was not written by politicians, but by the rectors and academic experts themselves.

The main purpose of the reforms was to bring the higher education in Ukraine closer to European standards. The post-Soviet centralized management model was abandoned, and universities gained more autonomy. Ukraine made the admission procedure for universities transparent, and began to implement further reforms. We had found reliable partners at the Ministry of Education and Science of Ukraine. In December 2015, I signed a memorandum of cooperation in Kiev with the Deputy Minister of Science and Education Inna Sovsun. The Memorandum covered our cooperation in three pillars. 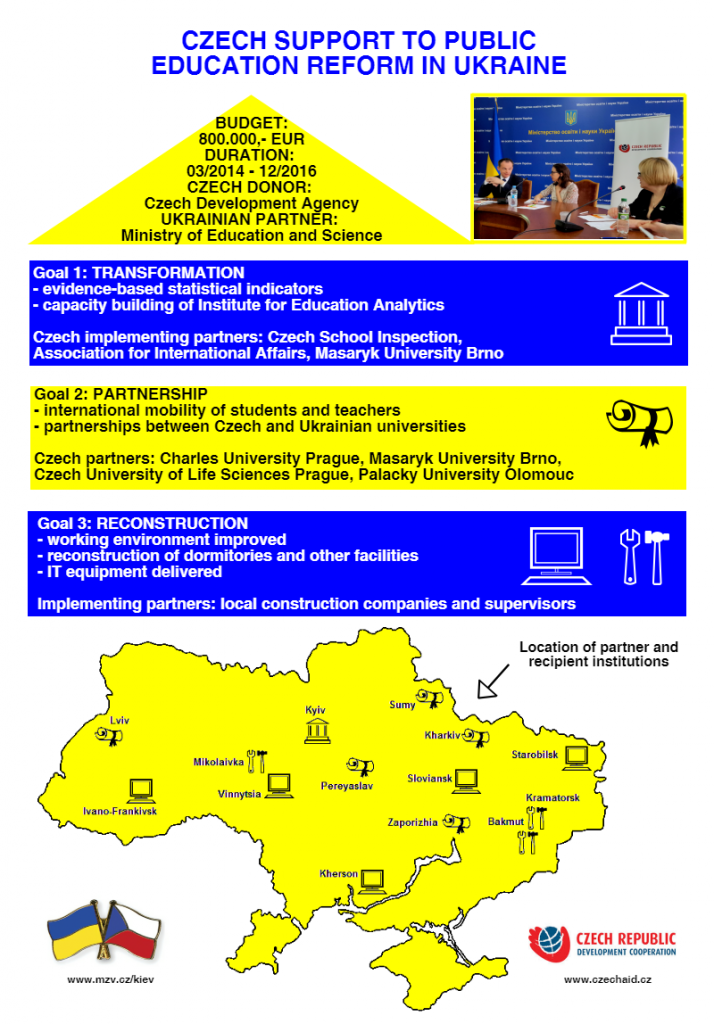 The first pillar focused on professional aid to central institutions with the reform of the education system. Our Ministry of Education, Youth and Physical Education, the Czech School Inspectorate and the Masaryk University in Brno participated in the project. They helped the Ukrainian Ministry and Institute for Analysis in Education in the implementation of the outlined reforms, especially in the area of ​​collecting, processing and recording statistical data. In cooperation with partners from the Visegrad Four countries, the Association for International Affairs (AIA) organized a conference aimed at reforming the financing of higher education and higher vocational education in Chernivtsi in October 2015.

The third pillar consisted of material aid to schools directly affected by the conflict. Many of them had to leave their original headquarters in areas controlled by the pro-Russian forces and find new spaces. This was the case, for example, for the Donbas National Academy of Civil Engineering and Architecture in Kramatorsk, the National University of Taras Shevchenko in Starobylskor and the Institute of Foreign Languages ​​in Bachmut. The Czech Development Agency helped them reconstruct the school building, prepare a complete reconstruction of the dormitory for students and equip the premises with computer technology.

Human resources are the best investment in the future of each country. Less than three years later, the Czech aid to Ukrainian education has brought concrete results.  Ukraine needs to raise new elites in a transparent, democratic and modern higher education environment. Only in this way will it gradually overcome the corruption, oligarchy and bureaucracy that is stifling its development potential. At the same time, I’m aware that this is a long-distance run. I am, therefore, glad that the Government of the Czech Republic has decided to continue to provide extraordinary aid to Ukraine in 2017 at the proposal of the Ministry of Foreign Affairs.